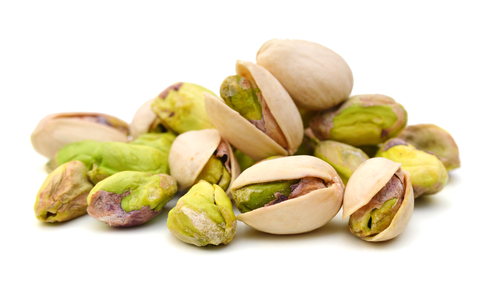 According to the U.S. Centers for Disease Control and Prevention, someone is considered prediabetic it they have blood sugar levels higher than normal but are not yet in the diabetes range. If they do not take actions, 15 to 30 percent will develop diabetes within five years.

Eating a handful of pistachios makes a great tasty snack and is also healthy because it lowers the blood sugar level by slowing down the absorption of carbohydrates in the body. Eating pistachios will also protect the heart and arteries from harm caused by stress in diabetics, scientists found. Diabetics have double or higher the risk developing heart disease than people without diabetes, according to the National Diabetes Information Clearinghouse.

Pistachios are rich in vitamin B6, which can help keep your hormones in check. Pistachios also contain lutein and zeaxanthin, antioxidants which protect your eyes, and are are rich in potassium and fiber.

A group of researchers from the Universitari Hospital of Sant Joan de Reus, in Reus, and the Instituto de Salud Carlos III in Madrid collaborated on the trial, found people who are prediabetic and who ate about two ounces of pistachios daily showed significant drops in blood sugar and insulin levels and improvements in insulin and glucose processing.

According to Reuters health:

In the new Spanish study, people with prediabetes who ate about two ounces of pistachios daily showed significant drops in blood sugar and insulin levels and improvements in insulin and glucose processing. Some signs of inflammation also dropped dramatically.

Although the trial specifically involved pistachios, many previous studies have found encouraging evidence that eating nuts may be linked to a lower risk of heart disease and lower cholesterol, the authors write in Diabetes Care.

The study team divided 54 prediabetic adults into two groups. Both groups were instructed to keep to a calorie-regulated diet with 50 percent of energy from carbohydrates, 35 percent from fat and 15 percent from protein, using provided menus and seasonal recipes.

One group was given 57 grams of pistachios, about two ounces, daily to add to their diets. To match those calories, the comparison group added olive oil and other fats for the four months of the study.

By the end of the study, fasting blood sugar levels, insulin and hormonal markers of insulin resistance had decreased in the pistachio group while they rose in the comparison group.

Dr. Joan Sabate, a professor of nutrition and epidemiology at the School of Public Health at Loma Linda University in California told Reuters Health. “There are some indications that eating pistachios on a regular basis lowers fasting glucose and lowers insulin and hormone ratio, which is particularly relevant in prediabetic subjects because unless they do a change in lifestyle they will end up being diabetic. So the fact that eating nuts on a regular basis seems to improve some of the critical parameters is very relevant.”

Professor of biobehavioural health and nutritional sciences Sheila West said: “In adults with diabetes, two servings of pistachios per day lowered vascular constriction during stress and improved neural control of the heart.”

Obesity is the number one risk factor for diabetes, so the best and most effective way to reduce your risk of Type 2 diabetes is to maintain a healthy weight by eating a healthy, balanced diet and by being regularly physically active.